For parents and teachers 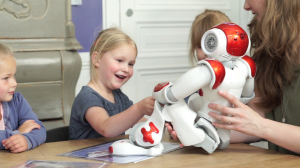 Robots in language education: What do we know so far?

There are various situations in which a robot may assist a teacher in helping children to learn. Imagine a child from Germany who has recently moved to the United Kingdom and needs to learn English. Everybody in the child’s new classroom will speak English, but it is very likely that nobody is able to speak the child’s mother tongue: German. A robot that can speak both English and German, can use the child’s mother tongue to help the child learn English. For example, the robot can translate some words for the child or speak a mixture of German and English while increasing the amount of English over time. Another example is a parent who would like their child to learn a foreign language that they do not speak themselves, such as English-speaking parents who would like their child to learn Chinese. A robot that can speak Chinese can help the child learn this language.

With many existing applications on tablets and smartphones to learn languages (such as Duolingo), you may ask: why use robots for such situations? You could also use tablets and smartphones, which are much cheaper and break less easily than robots. Researchers believe, however, that robots have advantages over other forms of technology. One of these advantages is that they have a physical body and can actually play with children in a real situation. Tablets and smartphones are limited to a virtual environment: the child sees educational content on a screen and can interact with it, but has to keep watching the screen to learn. Robots can move around or play games with toys together with the child and thus have in theory many more possibilities to interact with the child in the real world. Another advantage is that robots often look human-like, with a face and a body. This makes robots social. When children interact with the robot it is like they are talking to another person. For this reason it is more natural and fun for a child to speak to a robot than it is to speak to a tablet or smartphone. Moreover, children trust robots as resourceful beings, like they trust peers and teachers.

These advantages are the reason why people have started to develop robots to help children learn a language. You might want to know: does it really work? Several researchers have investigated how much children learn when playing with robots. In these studies, children often play games together with robots, such as rock-paper-scissors, I spy with my little eye, reading a book, or playing games on a tablet. These games can have different goals. They can be aimed at teaching a child new words, how to read, how to pronounce words, or even sign language. 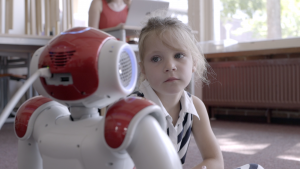 Children often learn from playing such games with robots. However, they often do not learn more when playing with a robot than when they play games on a tablet. Of course, for schools or parents to consider purchasing a robot, it is important to show that children learn more with a robot than with other, cheaper, forms of technology. The robots that are currently available, do not seem to be much better than other technologies, although they do hold many promises. With further technological developments in the future these promises might be realised.

A possible reason why children do not learn more from robots than tablets is that not all of the potential advantages of robots can be used in practice. For example, we discussed how robots can move around and play together with children. In reality, robots rarely move around during these games, as they may fall over and break. They are still rather slow and clumsy. Also, many robots cannot recognize or hold children’s toys, which makes it difficult to design language-learning games in which children and robots together play with toys. Recognizing what children say, and reacting adequately to that, is also still difficult for robots. So, there are additional technological developments needed before robots can really be used in a way that would help educating the child.

Another reason why children do not learn a lot from robots is that we do not yet know what the best way is for the robot to behave. Should it say the child’s name, what kind of “personality” should it have, and how should it correct the child if they make a mistake? Right now, researchers let the robot mimic human teachers. However, we do not always know exactly what teachers do while teaching. How do they attend to children, how do they know whether a child understands the material or needs additional explanations, how do they keep children engaged during lessons? There is still much to learn about what teachers do exactly that makes children learn, and how to implement this in robots. We do know that teachers are usually highly sensitive to what children say or do – which is still difficult for robots.

Even though children may not always learn from robots, they generally do enjoy playing with robots. Children engage more in the learning activity or may even be less anxious about making mistakes as compared to learning in classrooms without robots. When given the choice, children often prefer learning with robots over other forms of technology or more “traditional” classrooms which do not use robots. An important question which has not yet been answered is whether robots sustain children’s interest over a longer period of time. It is possible that a robot is very interesting for a child because it is new, and that it is will not be interesting anymore when they get used to it. Parents may recognize this from tablets: even though children still enjoy playing with tablets, they are not as exciting anymore as they were at first, as many children grow up playing with tablets or smartphones. This may also be the case for robots, and in that case children may, in the future, not be as excited anymore as they are now when playing with robots. 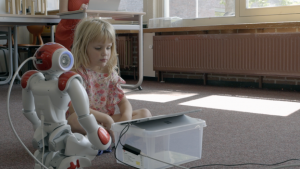 To conclude, at the moment there is not a great advantage in using a robot to assist children’s language learning. There is still much we need to learn about how robots can best be used for language education in schools or at home. Despite this, robots are the future and they do hold promises. Robots might be used in education for multiple purposes.

For example, robots might work well for learning of rote tasks, such as learning the multiplication tables. Robots will not replace a human teacher in the near and foreseeable future, but can be used as a tool aiding learning. For example, a robot can store a large amount of information and can therefore help children by reminding them of certain facts, providing directions and so forth. When it comes to language learning it can explain some words, or provide translations when needed. Another area where a robot can aid teachers is to help young children to become more independent. While playing with the robot, the robot can remind the child when it is time to tidy up, what is the next activity and so forth. Thus, the use of robots for educational purposes holds certainly potential and robots will probably become an integral part of education in the future. But for now we need more research and additional technological advances to help us realise this potential.